GTWN Welcomes Leaders of the Mobile Industry to the Palau Guell, Barcelona, at the GSMA’s Mobile World Congress

More than 200 senior executives from the Mobile Telecommunications, Digital Media and IT industries were welcomed to the GTWN/MWC Cocktail held at Palau Guell on the evening of 22 February 2016 to network, discuss and debate the future of mobile telecoms as it transforms every part of our lives and societies. This year, the GTWN Welcome Cocktail was generously sponsored by rising Silicon Valley women-led IT consultancy and talent management company, iTalent. The GTWN Welcome Cocktail has become a special feature of the calendar for thought leaders attending the annual GSMA Mobile World Congress in Barcelona, and the location for the 2016 event, Palau Guell, once again delighted and entranced the invited guests. 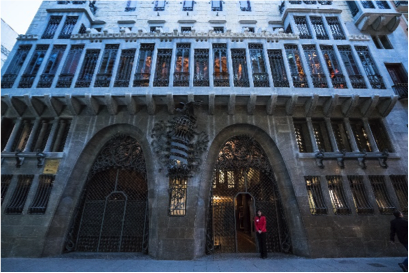 Palau Guell, which is an urban palace in the heart of old Barcelona, is a UNESCO world heritage listed building and a magnificent example of domestic architecture in the context of Art Nouveau. Designed by renowned architect Antoni Gaudi, it was the first of a series of architectural masterpieces designed for his patron, Eusebi Guell. As an early work, the building contains the essence of Gaudi’s later works and is fundamental to understanding his architecture.

Gaudi designed a functional palace adapted to the family’s needs in both their private life and the intense cultural and social life they led. It was the home of the Guell Lopez family until they moved to Park Guell. The building is noteworthy for its innovative conception of space and light. In building Palau Guell, Gaudi­ used a variety of solutions based on very personal approaches and created exceptional expressive forms, the fruit of his imagination, using noble traditional materials (stone, wood, wrought iron, pottery, glass, etc.).

Guests were then treated to a private viewing of the museum, accompanied by expert Museum staff, who explained the history of the building and pointed out the highlights of its architectural style and decoration. 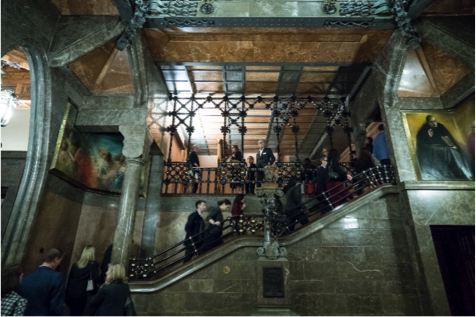 With its impressive marble and stained glass interior and sweeping staircase stretching over four floors, Palau Guell was a fitting venue for the launch of the fourth edition of the GTWN’s webzine, “The Mobile Century: Life and Work in the Digital Era”. As an example of great vision and beauty, it was also an ideal setting to stimulate reflection on the future of the mobile industry as a facilitator of economic and social change.

Speakers at the Discussion Forum which followed the tour of the Museum were asked to propose :One Big Idea” for how digital mobile technology could be used to bring about economic and social development for the benefit of humankind. 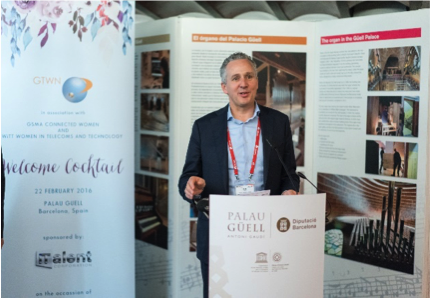 Keynote Speaker, Andy Penn, CEO of Telstra, opened the discussion forum. Telstra has been a long term supporter of the GTWN and its objective to provide a network of senior women and men in the ICT sector and a focus for debate on the future of the industry. He stressed the need for thought leaders in the mobile industry and its associated partners to foster innovation, open collaboration and entrepreneurship, if the industry is to realise its full potential. Andy also reiterated Telstra’s support for the splendid work of the GTWN in highlighting the contribution of women to the industry. Telstra has been a generous supporter to this work, in particular through Kate McKenzie, Telstra’s Chief Operations Officer, who is also GTWN President for Australia. Andy and Kate were accompanied by a number of Telstra’s senior female executives, including Head of International Business Cynthia Whelan, Director of Regulatory Affairs Jane van Beelen and head of the CEO’s office, Amanda Duggan. 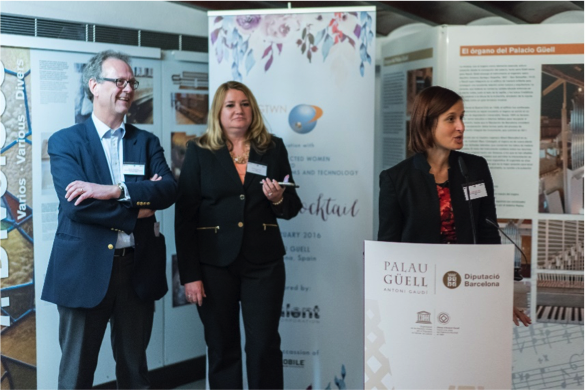 Renee LaLonde, CEO of iTalent Corp, sponsor of the cocktail, highlighted the importance of focusing on the human factors behind the technology, rather than technology for its own sake. iTalent are the first international consultancy to launch a mobile platform to enable real time collaboration between co-workers, wherever they may be around the globe. Combined with language translation capability, such innovations can bring workers together to overcome linguistic and cultural barriers. Renee also reiterated her strong support for the work of the GTWN, which is a perfect fit with her leadership role for women in tech. Innovation and diversity go hand in hand, believes Renee, and she is proud to have received several awards for being a women led business.

Danielle Brown, Chief Diversity Officer and assistant to CEO, Intel also spoke about the importance of diversity to ensure that the technology sector brings about real economic and social change. As head of Intel’s $US300m diversity project, begun in 2015, Danielle is proud of the leadership that Intel’s senior management team are taking in encouraging more girls and women into the tech sector. Leading by example, Intel’s first equal pay survey to the end of 2015 showed that, per skill level, men and women have pay parity at Intel.

Pierre Guislain, Senior Director, Transport & ICT Global Practice at the World Bank, spoke of the need to support developing countries in improving their connectivity and competitiveness by linking people to markets, services and employment opportunities. According to Pierre, we need to ensure that we use digital technology to help developing economies to leap frog economic development states, and thus raise the bar for the world economy generally. Mobile phones are central to the ability of developing economies to realise this growth potential and raise their citizens from poverty.

THANK YOU again to our wonderful sponsor, iTalent, for having made this wonderful event possible, and also for contributing to the fourth edition of “The Mobile Century: Life and Work in the Digital Era”. Thanks also to our thought leaders who made the discussion forum, on how the mobile industry can drive economic and social development, such a great milestone in furthering the quality and access of digital communications for the world.